Tel Aviv is sort of one part Europe, two parts Middle East with a dash of Africa. Israel’s modern and cosmopolitan capital city is jam-packed with art, design, natural beauty, nightclubs, ancient ruins (close by) and delicious Middle Eastern cuisine. Below are some of my favourite things about Tel Aviv – and I always recommend visiting in Summer, but I am a bit of a reptile, hot weather is not for everyone…

Less than one hour from Tel Aviv is the site of a once-exclusive Roman spa town. Caesaria is a small town on the Mediterranean with extraordinary ruins of opulent villas owned by celebrities of the time such as Pontius Pilate and King Herod. Excavations have uncovered a bathhouse with mosaic floors depicting animals and grape vines. Caesaria has two amphitheatres, one of which is still used for concerts. A crusader-era church, palace and a market place have also been uncovered, with many more things yet to be discovered along the coastline. Most of the ruins are in the Caesaria National Park, which has a museum holding precious artefacts from the site. Roman columns along the beach are fabulous for artistic photos.Ice cream and drinks are sold near the ruins. Caesaria harbour is dotted with restaurants in which to enjoy the striking sunsets. 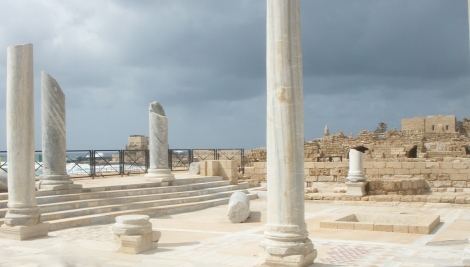 It’s possible to get to Caesaria from Tel Aviv in two hours. There are three ways to get to Caesaria: get the bus from Akiva interchange and walk for the last 30 minutes or a train and a five minute taxi. If you have a car, the trip is only 1 hour from downtown Tel Aviv. The museum is open from 8am till 6pm in summer, closing at 4pm in winter. Admission is 38 NIS for adults.

Visitors to Israel will notice that food is served in great volume here and it seems that people are constantly eating. It’s easy to understand the local passion for dining: Tel Aviv is a food paradise. Israeli cuisine is a Middle Eastern and European fusion, a place where chicken schnitzel and goulash is served alongside hummus and halloumi cheese. The best place to try Israeli food is a misada mizrahit , which simply means “eastern restaurant” in Hebrew. These local restaurants can be seen all over Israel: there is one in every neighbourhood, usually a glass shop front with simple wooden furniture. Misada mizrahit serve a meze starter course – up to ten different, tiny little salads; The main course is usually grilled meat (chicken, beef or lamb) served with French fries. There is usually only one or two desserts on the menu in misada mizrahit, whatever is made on the day. Mousse chocolat is a favourite – authentic, French-style chocolate mousse.

A kebab is always a good thing

While Egypt, Israel and Jordan compete for the title of Felafel Inventor, some say it’s origins are South Asian. We will never know who is right, but we do know that Israeli felafel is fresh and phenomenally tasty. Felafel is sold as a healthy, cheap street food; these balls of chickpea, garlic and herbs are the great equalisers as they are unrestricted by Jewish, Christian and Islamic dietary law. Everyone loves them in Israel, usually sold in a pita bread pocket with tahini sauce and salad. All the felafel is good, Countless shops claiming to make the best felafel in Tel Aviv; Felafel HaKosem, meaning “felafel magician”, is an accurate description of their felafel-making skills. Combination plates with felafel, salad and vegetables are sold for less than 50 NIS per dish (Shlomo Hamleach St 1, Tel Aviv. Open until late every day except Fridays when closing time is in the afternoon)

Don’t forget the kebabs! A food very dear to my heart. There is no such thing as a bad kebab in Israel so fill your boots: chicken, beef or lamb, its all wonderful. The pita is always amazingly fresh, having lived in Asia for years I don’t take this for granted. Wander around and check things out, the food is generally all very good. 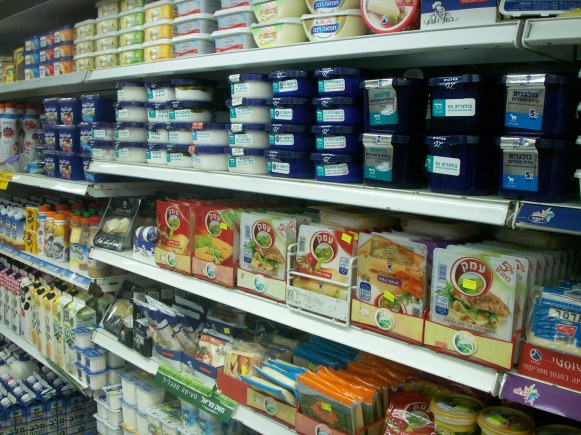 There was not much in Tel Aviv in the 1930s, so the Jewish architects fleeing Nazi persecution in Germany decided to make something of their new homeland. This was the birth of White City, a collection of modernist Bauhaus buildings which is now a UNESCO World Heritage site.

The Bauhaus buildings of Tel Aviv are still chic and modern-looking, possessing the typical Baushaus aesthetic: smooth structures with curved balconies and plenty of windows. Although Bauhaus is a rejection of unnecessary detail and ornamentation, the buildings are beautiful and unique. The White city buildings include houses, hotels, public offices, apartments and shops. Not all of the White City buildings are protected and refurbished, which means that some of them have been untouched since the 1930s.

Tel Aviv is the home of over 4000 Bauhaus structures, more than any other city on earth, which is a delight for lovers of design and architecture. Although known as “White City” the Bauhaus buildings aren’t necessarily white, but most of them are painted in pale or pastel hues – a favourite colour scheme for Mediterranean houses. To find out more about the White City buildings, head to the Bauhaus Center at 99 Dizengoff Street. Tours start here every Friday at 10.00am for 60 NIS, they last for two hours. Book in advance online or at the Center itself – http://www.bauhaus-enter.com

If you happen to be in Israel from April until October then you’re in luck; the country is full of beautiful beaches along its 4 stunning coastlines, the Mediterranean coastline’s powdery golden sand and deep blue water runs right through Tel Aviv. Locals and visitors alike flock to central Gordon Beach for more than just swimming and sunbathing, and it’s all free. Gordon is the thriving hub of Tel Aviv’s social scene: a place to play a game of paddleball, buy strips of fresh chicken schnitzel and felafel, get some henna body art, meet up with old friends or make new friends. Musicians and artists give impromptu performances on the sand.

Vendors deliver cold beer and artik (ice cream popsicles) while you sunbathe. Surfing and diving services are offered during the beach season. Umbrellas and deck chairs can be hired but to reduce costs, bring your own towel. Tel Aviv’s public beaches have good toilet facilities and outdoor cold showers – and it’s free, you only pay for extras such as water sports. Lifeguards are on duty from May till October.