I figured it stands to reason that there must be great places to dine in a city like London that aren’t eye-wateringly expensive or a large chain of boring same-samey restaurants.I’ve had neither the most appalling nor most exciting meals of my life in London. In my experience it has always worked like this: if you pay loads of money, it’s usually very good. If you don’t, it’s usually ordinary. I’ve always thought that unless you go in for fine dining that it’s rarely exciting.

That is until I did some extensive research with old school chums JJ and SM, as one always needs an entourage for such research. Our challenge was to find 5 five eateries in Central London that are not multinational chains; places which have character and wholesome, delicious fare and where one can dine for £12 -18 per person. No curry please. The closer to £12 the better.

There are many restaurant chains in London that offer cheap meals. I’ve eaten at places such as Bella Italia, Wagamama, Leon, Pret a Manger, All Bar One and Yo! Sushi – they are all absolutely fine. However, although such chains serve us well with their cheap and cheerful meals for £4 – 10, we all need to experience somewhere local with an exciting atmosphere.

Here are the places that we thought were worth a mention. The amount stated is the cost for one person.

For Australian, Japanese, French, Korean and Thai visitors: the portions are generally quite large in the UK. For Americans visitors : you may need to bring a few granola bars to supplement the smaller portions in the UK. DISCLAIMER: All portion remarks expressed in this entry are based on our own appetites and expectations. My friends and I eat like sumo wrestlers, perhaps you don’t…

Traditional Moroccan cuisine in a humble, tiled setting. With their fine tagines and fluffy couscous, Couscous Cafe is a satisfying and healthy option. The meals are beautifully presented and the atmosphere and location are unbeatable. One glance at the charming menu, constructed lovingly by someone who…. who doesn’t speak English as a native language, well – it will make you smile. There are good vegetarian options and the most appealing feature of all is the price: 2 of us shared a mezze platter, couscous and a tagine for £23 (7 Porchester Gardens, Bayswater W2 4DB. Closest station: Bayswater) 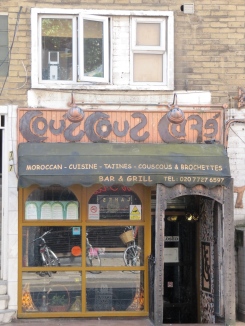 Another trick from up JJ’s sleeve, this London establishment has an Authentic Cuban vibe and a menu that rivals my favourite paladars in Havana. The only difference being that everything on the menu is actually available in  Cubana, as opposed my Havana haunts. The tapas platter followed by the slow roasted Cuban pork, served with chilli rice, beans and plaintain was actually only one starter and one main but the large portions meant it was plenty for two of us with just enough room for one of Cubana’s amazing fresh fruit cocktails such as a Cubana Passion. The special Sputnik cocktails are also very appealing. On Friday nights there is a Cuban band and you can drink mojitos and dance till 3am (48 Lower Marsh, SE1 7RG. Closest stations: Lambeth North or Waterloo) 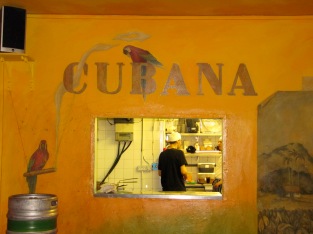 An open kitchen means Cubana has nothing nothing to hide

The general complaint about Tom’s is the cost but I ask the critics: where is cheap on Westbourne Grove? I find that Tom’s is quite good value, they never disappoint and it’s also in one of the best locations in town. I made the mistake of assuming that the soup was starter size and I got an enormous plate of stew with 2 chunks of rye bread – delicious and there can be no complaints about the portions. I was quite full after this and made the error of ordering an aubergine parmagiana (also large with a salad and more lovely bread) I spent £18.84 by myself but with a side order and another drink  this is easily enough for two hungry people. I regret that I didn’t try the inviting desserts. Tom’s closes fairly early at 6.30pm (226 Westbourne Grove W11 2RH. Closest Station: Ladbroke Grove) 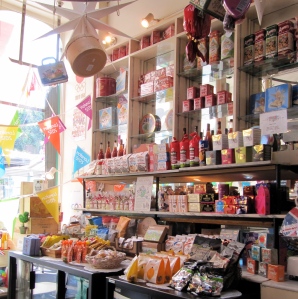 Another case of over ordering at Tom’s

Of course, we had to stop by Chinatown. JJ chose this 28 year old establishment that serves Chinese cuisine from various regions as well as some “English Chinese” favourites. As with all of Chinatown’s finest outlets, Mr. Kong is not ostentatious: the decor is not fashionable, the service is good, but not remarkable. Mr Kong is a busy restaurant because the staff are friendly, the food is good and it is open till well after midnight. The duck and san choy bow (minced meat and/or vegetables served in lettuce leaf cups) are popular and suitable starters. The beef in black bean sauce didn’t last long on the plate and the hor fun noodles were the fresh, soft and MSG laden highlight of our meal. Out delightful 4 course meal was complimented by a Tiger beer and a rest before we waddled home crammed full of our exotic delicacies (21 Lisle Street, London, WC2H 7BA. Closest Station: Leicester Square) 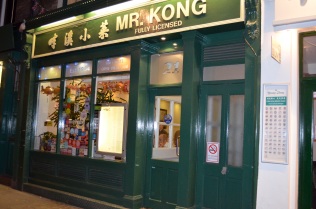 Not a fancy place 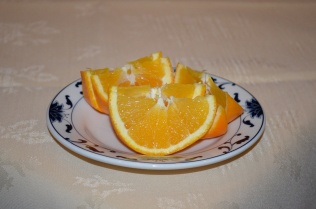 I know that it IS a large chain but I really love POD – I can’t help it! They use compostable packaging, organic or fresh ingredients and recycled furniture! They are eco-friendly and healthy and the staff are so nice, no doubt because they eat at POD. For all this, I need to give them a plug. I recommend POD to travellers who wants something healthy and fresh. The vegetarian menu is impressive, POD also cater to the gluten and lactose intolerant. The ready-made sandwiches and detox box lunches are supplemented by the Thai curry, soba noodles, Beef Bourguignon and Moroccan Lamb Meatballs. The organic porridge is unforgettable. (Several outlets throughout the city, check here for locations)

Finally we have the most expensive finger sandwiches and pastries in town, but he who hasn’t dined at Fortnum and Mason’s hasn’t lived. The new Diamond Jubilee Tea Salon, in what used to be St. Jame’s Restaurant, is the hottest place in town for afternoon tea. It is £40 – 50 per person for sandwiches, scones, a selection of cakes and savouries such as lobster omelettes and mushroom pies. If you think of it as 2 meals in one, which is exactly what it feels like after 2 hours of stuffing your face full of cream pastries and caviar, it’s quite a steal.There are also a la carte savouries such as duck a l’orange, club sandwiches and cheese souffle, they are around £15 -20 each.

The Fountain restaurant downstairs has a smaller but still substantial afternoon tea for £28 and £18 fish and chips which are much more exciting in my opinion. I recommend this or a Diamond Jubilee afternoon tea for the first time visitor to F&M’s. If it’s good enough for Her Majesty, it’s probably good enough for you too. (181 Piccadilly, W1A 1ER. Closest Station: Piccadilly Circus) 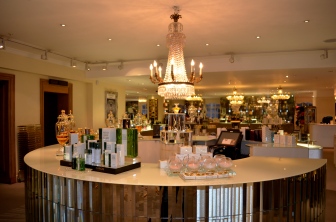 Why bother with that Tesco’s place?

The Fountain’s fish and chips 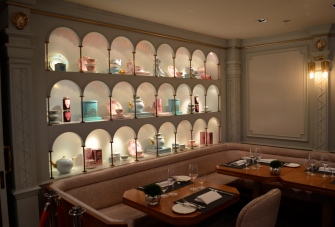 The Fountain is very calm and quiet on weekday afternoons